MABDR – PA north to the end at the NY border

Sections 5-9 go north on mostly unpaved forest roads through PA to the end of the route at the NY border.

Early on in PA, we found this closed road on the route:

This was easy enough to route around to the west, and we joined right back up with the BDR at a closed gate on the other end.

Off road riding in PA was entirely new to us, and turned out to be delightful. My experience in PA has admittedly been mostly limited to passing through on the interstate, and what I saw from there did not attract me much. Thus the benefit of traveling on back roads. I had no idea PA had so much outdoor recreational opportunity. The state forests and state parks are beautiful and very nice, and full of nearly endless miles of unpaved forest roads. While I’m sure there is technical riding to be found, I was delighted at all the fast, well maintained roads through the woods. Roller compacted forest roads were an entirely new experience, and it was great fun to ride so easily and quickly through the forest. Did I mention it was endless? I have no idea how they maintain all those roads. They were everywhere, hundreds of miles. 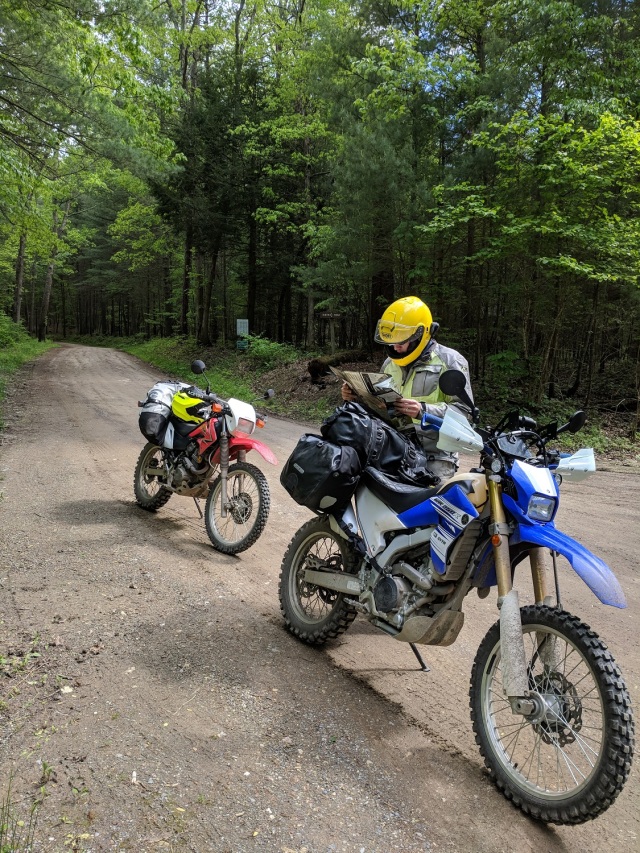 At some point after this shot, we camped the night at Pine Grove Furnace State Park in PA, which was another excellent state park campground. We even manged to camp near two other moto travelers, one from NY, and one from Alabama who was also on the BDR. (*Waves hi if you ever see this*).

We found another closed road on the BDR here, which was also easy to route around: 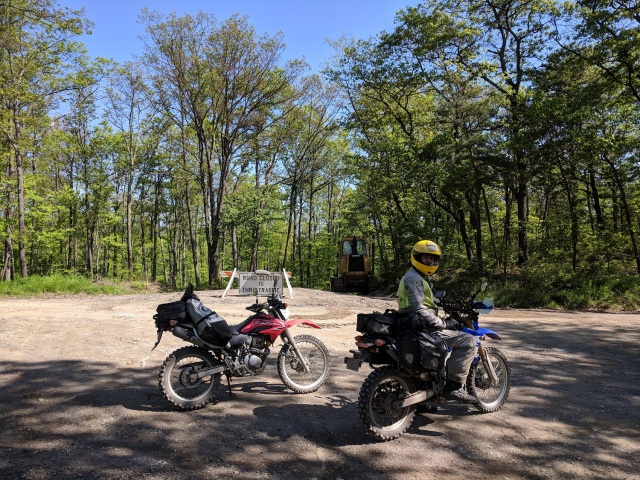 Our re-route was probably just as good, as we found this along the way: 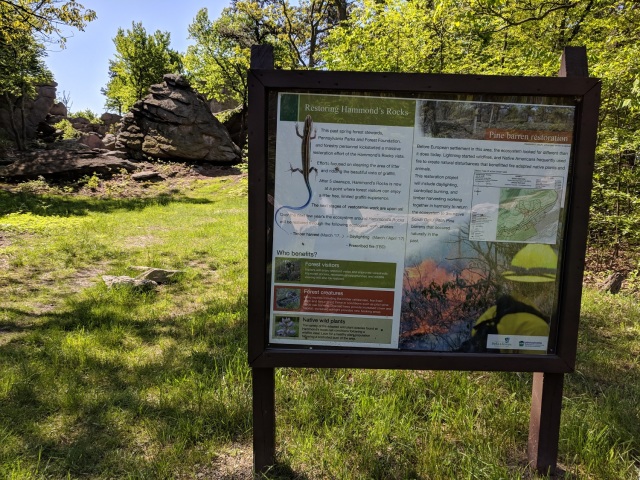 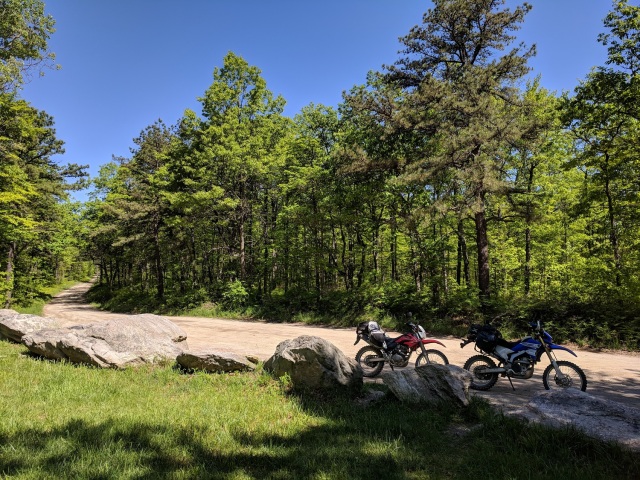 Paraphrased, the sign basically says “humans really trashed this place up, and now we’re trying to fix it.”

The GPS tracks tried to route us up a marked private road, which I suspect is an error. We routed around easily enough. We could have just blasted on through, but that would be rude, and being considerate of private property is how you keep off road riding opportunities from being closed. 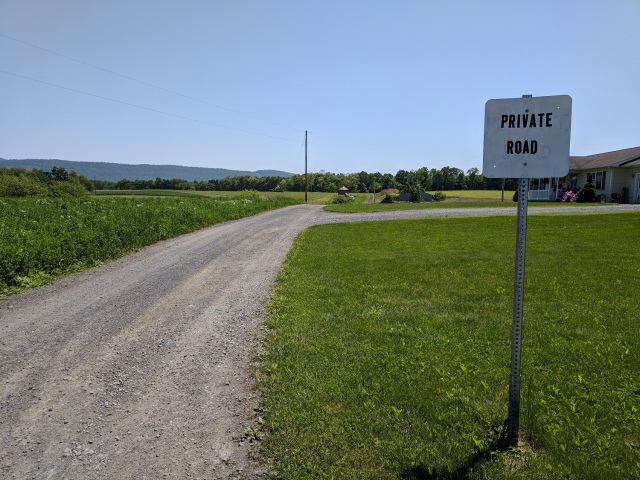 I wish I had my helmet camera. We were traveling through some Amish/Mennonite farmland on an unpainted paved road, and ended up stopping so a boy could let some cattle across the road. We stopped well short and turned the motors off, as it would have been really rude to spook the cattle. The boy could not have been more than ten, which led to some “kids these days” discussion regarding how most modern mainstream children that age are not capable of that sort of responsibility. When he got all the cows to the other side and closed the gate, we started up and rode by. (I’m not sure if those cows cared about a couple of motorcycles or not, they were dairy cows who clearly wanted to head back to the barn, and didn’t seem concerned with anything else.)

Obviously we stopped to get a picture of this sign:

A few times, I asked Kevin to stop in middle of the road just to get a picture, we rode through so much truly gorgeous scenery (that the camera never really captures):

At this point in the trip, we really needed to find a way to do some laundry. Thus we ended up at a slightly dumpy appearing commercial campground right on a major road. Despite a somewhat sketchy appearance, we had a reasonable tent spot to ourselves, a clean if outdated bathroom, and the owner was a pretty nice, chatty guy. This also happens to be the only time I got pictures of our camp spot the whole trip.

Randomly, the camp owner is also the owner of a couple of Bison, who share a field with his solar panels (this makes sense):

Day 7 (we started the BDR after lunch on Day 1) had us passing through Poe Paddy State Park in PA, yet another fantastic outdoor recreation area. 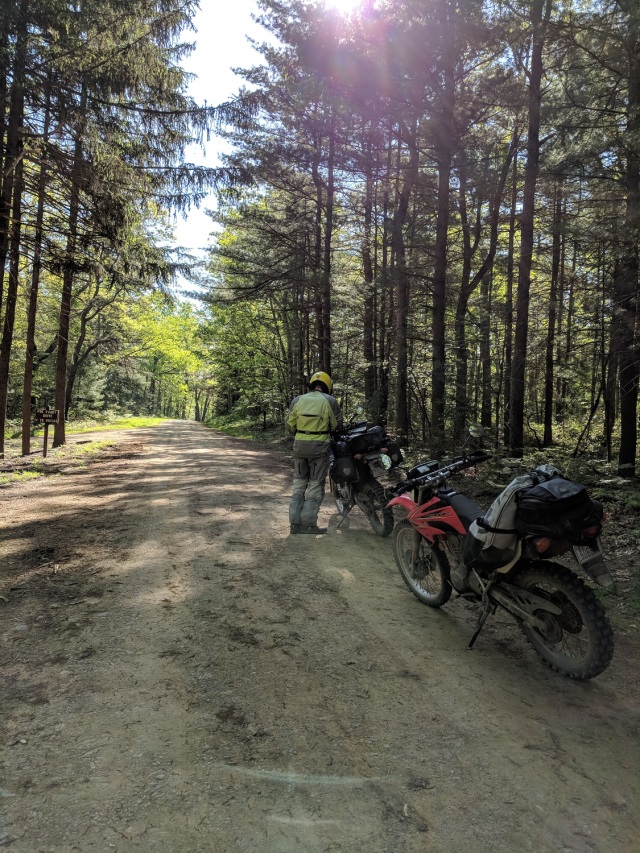 The owner of last nights campground had told Kevin about an old railroad tunnel that had been re-done in 2015 into part of a walking/bicycling trail. We spent some time this morning on a side-quest to go check it out, only learning after we finally found it that its practically right off the BDR in the state park. 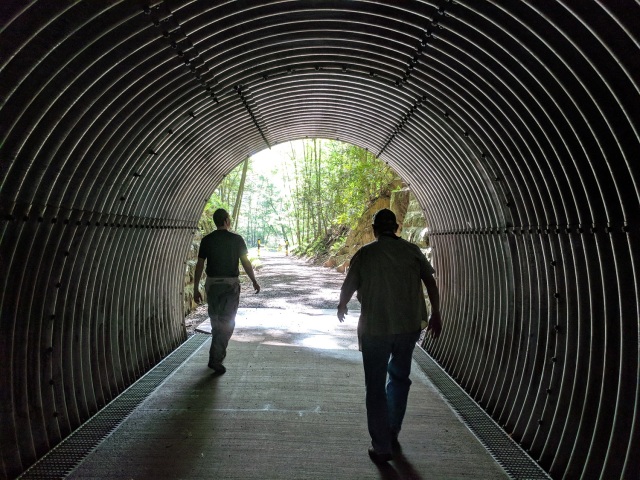 We met a man named Jeff Zimmerman walking on the way in, who proved to be a delightful, if long winded, gem on our trip. Jeff has keys and access to the “professor’s shanty,” a shack just off the end of the tunnel, and he demonstrated his considerable skills in telling rambling old man stories telling us all about it. 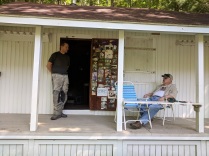 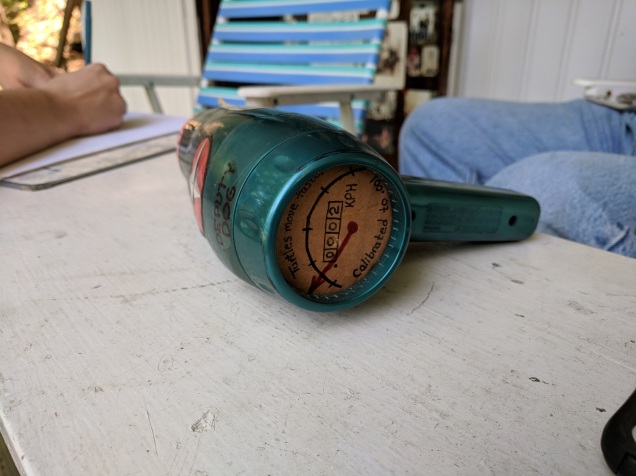 We also learned that due to the bend in the river relative to the mountain tunnel, you can essentially float in a tube off one end of the tunnel, and if the river is slower, spend nearly an hour floating around the mountain, and then get out at the other end of the tunnel and walk a relatively short distance back. Now that’s neat.

I really was torn between living in the moment and taking advantage of our small bit of fortune in meeting this local person willing to give so much insight into this spot, and feeling the need to escape from a very one sided and long winded conversation so we could put some miles on. I wonder if we’d sat down and had a beer with him if we’d still be there right now.

We really did have a lot of fun in PA: 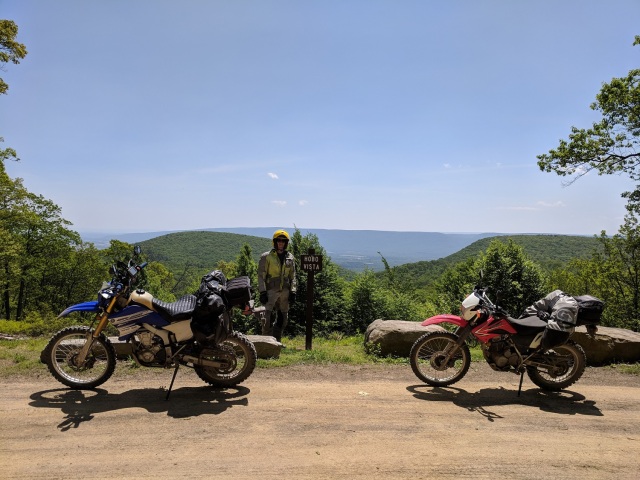 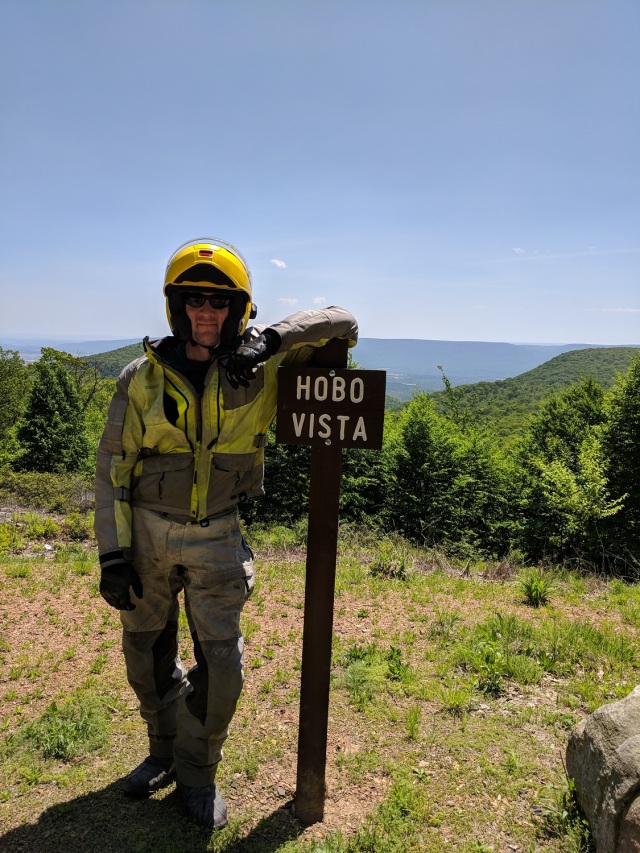 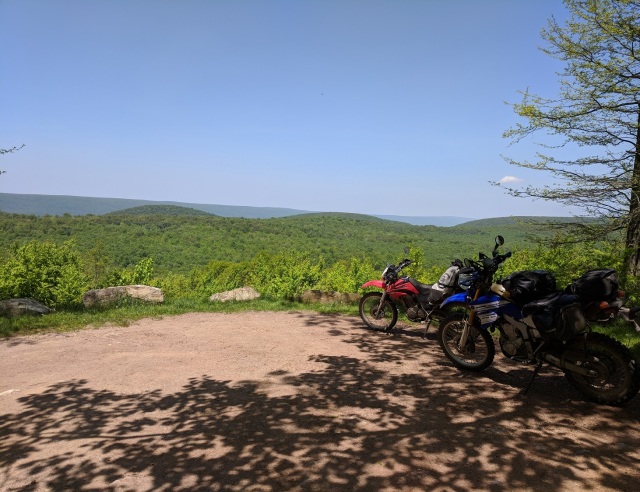 We spent our last night on the BDR at the Pettecote Junction commercial campground, owned by a really nice couple. At this point, it was Saturday of Memorial Day weekend, and they were booked solid. They could have turned us away, and instead let us set up by their pavilion in a common area since there were no camping spots left. This is one of the nicest, most family friendly campgrounds I’ve ever been too. (Seriously, most well kept and nicely maintained campground I think I’ve ever seen, and this is apparently where the high dollar travel trailers go). As dirty moto hobos, we were a bit out of place, but the kids and the noise calmed down, and we got a good nights sleep after a much needed shower.

Our final day on the MABDR took us through Colton Point State Park, and the “Grand Canyon of PA,” which of course is a very picturesque gorge with a river at the bottom.

We didn’t know what this was on our way into the park, so we took a picture: (I still don’t know what it is).

I never did tire of the scenery:

And that’s it for the MABDR. We made it to the official end of the route just before lunch. 7 days to ride the entire route, spread over 8 days (started after lunch on Day 1, finished before lunch on Day 8). If I had to guess, I would think most people will run this route in 5-7 days, unless you get really enthusiastic about side-quests and sightseeing, run a fairly slow pace, or run into even more delays than we did. If your goal is to go through quickly, 4 or 5 days is reasonable.

MABDR time estimate:
3 days – people report they’ve done this. I believe them, but am skeptical that you can complete the route that fast and still ride respectfully. There are a lot of places on the MABDR where its not appropriate to carry much speed, regardless of your ability. These are public roads, and there a lot of dense residential areas. A rally racer could probably complete the route in under 24 hrs. The MADBR is not a rally race.
4 days – possible with long days, consistent quick pace, few stops, almost no sightseeing, and no delays (if you don’t camp, and especially if you skip the pavement section going to the historic sites and Antietem, 4 days is doable. I personally would not enjoy this trip)
5 days – full riding days, somewhat quick pace, few delays, limited sightseeing.
6 days – sweet spot – moderate pace, sightseeing, and delays (weather, tires, re-routes, etc) – I think most will want do the MABDR in about 6 days. This an enjoyable time frame for putting on miles, but not rushing through without seeing anything.
7+ days – slow/leisurely pace. moderate to significant weather or other delays, and/or moderate to significant sightseeing.

This is about 25 miles from the end of the BDR, and will only mean anything to particular family members:

Since our bikes and gear were so dirty from all the mud a dust, it was very helpful that it rained so much on the first day of our trip back home: 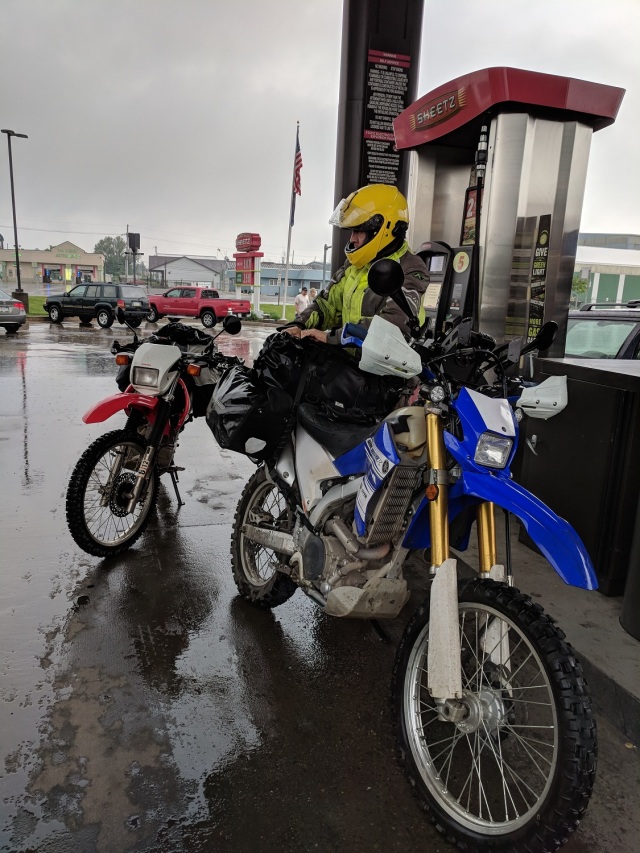 This balloon we found slowly blowing across the parking lot of our hotel on our final day of trip represents our feelings at the time:

We would like to extend a huge thanks and hearty congratulations to the BDR folks for putting together such a great route. Its hard to express to folks not in the know how much work is involved in putting something like this together. We had a great time playing around on our little bikes on this trip, and think the BDR group did an outstanding job making an interesting and varied route.

Lastly,  a note on bike choice. This route was specifically designed to be ridden by the oh-so-popular big adventure bikes. I’m sure you can have a great time on your R1200GS if that’s your thing (really, that’s not sarcasm). We are fortunate in that, as multiple bike owners, we had a choice of bikes to take on this trip. We also have the ability to buy any nearly any mass produced bike we want. We intentionally chose our small bikes over the bigger ones, and regret nothing. Kevin rode his 2016 Yamaha WR250R, and I rode my tiny 2009 Honda CRF230L. We had a blast. Everything is easier and less work on a small bike, and we goofed around and generally remembered the joy of riding a lot more than if we’d been on our bigger bikes. We’ve decided that riding a route designed for bigger bikes on smaller ones is a recipe for delight. When off road, smaller is better. As an introduction to BDR routes, the MABDR was fantastic, and left us wanting more.

Edit 2020/03: The MABDR was my first “BDR” style multi day trip, having only slowly and infrequently dipped my toes into dual sport riding before going. Previously, most of my riding was on road. I had traveled and camped on moto trips up to two months long, but with nothing more challenging than a gravel road (which can sometimes be pretty challenging on a loaded heavy bike in the rain, especially with very little off pavement experience). Several off road riding classes, more practice, a new bike, and a bit more dual sport riding later, and I’m completely hooked. I love it. My skills are improving slowly but steadily, and with it, my enjoyment of dual sport and adventure riding. This BDR stuff is awesome.

This site uses Akismet to reduce spam. Learn how your comment data is processed.